I seem to have lost my blogging mojo. Again. I've also noticed that a number of the bloggers I follow have been posting less frequently. I've been reading fewer blogs. I've been getting fewer comments. And I've had less to say.
I've been in this place before. Ironically, almost as soon as I say that I'm taking a break from blogging, I get inspired to blog about something, which is why I'm not saying: 'Farewell forever'. I'm just saying: 'I'm off for a bit'.
My new business is now getting up and running. You can watch this video to find out more about what I'm going to be doing. I did my first bit of outreach today to a potential (big) customer and got a really positive response - getting to meet them next week! That, together with all the pre-christmas fund-raising I've been doing for the school and local village hall etc etc etc (as blogged about here), is probably what has sapped my blogging energy.
So I'm going to go quiet for a bit. In the immortal words of that 80s Glass Tiger classic 'Don't forget me when I'm gone...'

In 2009 the Telegraph newspaper, using investigative journalism, uncovered a huge MP's expenses scandal. The results saw MPs resigning, being investigated, made to pay back money and in at least one case, imprisoned.
Now let's imagine that instead of having the Freedom of Information Act which we have here in the UK, we have a brand new bill that has just been passed by South African MPs today - the The Protection of State Information Bill.  Under this bill, anyone possessing classified government documents can get up to 25 years in jail, with no defence of 'acting in the public interest'. 259 MPs voted in favour of the bill. Only 32 against.  As one commentator said:  'All those in favour of corruption:259. All those against:32'
Had we had this bill in the UK during the expenses scandal, the journalists uncovering the story would have been facing 25 year sentences instead of receiving journalism awards.
South Africa is the gateway to Africa, the country which, post apartheid, was meant to be a shining example to the rest of the continent on how to thrive. Yet with this single piece of legislation, the country is returning to the dark days of apartheid whereby it was illegal to speak out against the government.
Wake up world. Wake up journalists. Take note. This is has severe implications for press freedom. Shouldn't more people outside of SA know about it?  As far as I can see, so far just the BBC have reported on this.
Yes America might be anticipating Black Friday this week (the day after Thanksgiving when Americans begin their Christmas shopping in earnest). But personally, I think a few column inches could be given to South Africa's Black Tuesday instead.
PS - back to light-hearted flippancy shortly.
Posted by Home Office Mum at 14:54 2 comments:

It's that time of year. You know, when you spend a fortune on stuff for others. And no, I'm not talking about Christmas gifts for family and friends. I'm talking about cha-ri-dee mate (in the words of Smashy and Nicey).

Charity: (noun) The voluntary giving of help, typically money, to those in need.


Now, I'm not saying that any of the causes are not worthy. In fact I am a supporter of them all. But there comes a point where you think your pockets might just start presenting lint instead of pennies.


It started out slowly: about three weeks ago, we had to donate a pound so that the kids could go to school dressed as a hero. The pound went to Help for Heroes.


A few days after that we had to empty our homes of old clothes to donate to bags2school.


Then of course it was poppy season so every time we went anywhere we donated again to collect an entire bunch of poppies because obviously I never remembered to wear the poppies I had and so always felt guilty about not having one on.


Then we needed to donate prizes for bingo and the Christmas Fair. In exchange the kids could go to school out of uniform.


Then it was school bingo - spend your Friday night paying to win a prize which you have donated to the school.


On Wednesday this week, I should have gone to a quiz night held by a local organisation to raise funds for a campaign against the installation of an incinerator. But I was away. But I'll be donating my time tonight to attend the committee meeting for this organisation, so that counts.


Similarly, on Friday we should be going to the quiz night at the local rugby club as they're trying to raise funds, but instead, we are going to a quiz evening on Saturday night to raise funds for our local village hall. That will cost us £20 for a babysitter, £10 in tickets and god knows what in alcohol.


This morning I drove in my pyjamas to the local shop to buy things for the Christmas Shoe Box appeal because having read the leaflet more closely, our second hand toys weren't going to cut it and they needed to be new. So I bought £14 worth of new tat toys, supplemented with newish looking old tat toys and had to buy gift wrap so that I could wrap the boxes, all done in a mad panic.


And then of course we have the school Christmas Fair. For this I have made 20 mini Christmas cakes (yet to be decorated), 10 jars of chutney, 10 bags of edible Christmas decorations (to be made still) and have bagged up heaps of our walnuts. All of the ingredients, jars and packaging has been paid for by me (Lakeland - I want a loyalty card). In addition, I will be  rummaging through the house for stuff to sell at the second hand stall, am calling a bunch of local companies to try rustle up some prizes for the raffle and will be spending the day of the fair setting up, manning stalls and spending money, buying back the stuff I donated no doubt.


Goodwill to all men and all that. But good grief it's expensive, not to mention exhausting.


I fear I have donor fatigue. Come 1 December, I am going on strike. So is my wallet.


Anyone else tired of all the giving when the season of giving hasn't officially started yet?

As a mother, do you ever feel like the Wicked Witch of the West? Constantly the bad guy - insisting homework is done, rooms are tidied, vegetables eaten. We turn the beloved telly/wii off and suggest some outdoor play. We dole out punishments, drag them to hated swimming lessons and make them use a knife and fork when eating. In fact the line I hear most often from my children is 'You're so mean!'

Funnily, daddy isn't painted with the same brush. Perhaps that's because he isn't there every day. He forgets that they have to do homework, feels that pasta, pesto and peas is a perfectly well-balanced meal (even if it's served daily) and is more than happy to mooch on the sofa in front of kids cartoons for hours instead of getting wet outdoors.
In the land of Oz, mothers are most certainly the Wicked Witch of the West and dads get to be the Good Witch Glinda, the popular one that everyone wants to hang out with.
But last night I was lucky enough to go see Wicked - The Musical. If you're not familiar with it, it's a prequel of sorts to The Wizard of Oz.  It tells the alternate story of the witches of Oz, of the unlikely friendship between two girls who meet at sorcery school. It turns the notion of what is good and what is bad on its head and makes you look at the story of Dorothy and her trip through Oz in a whole new light.
It brought home the message that just because you're painted as the Wicked Witch doesn't mean that you're wicked, you're simply trying to do good things that other people don't necessarily want you to do - like making children clean their teeth or in the case of the Wicked Witch, giving animals a voice.
There were parts of the storyline that I found a bit obvious and moralistic, but that's where my criticism ends. The costumes, set and actors were all spectacular, particularly given that most of the key roles where played by second understudies. The music and dance was amazing and it's easy to see why the show won the 2010 Olivier Award for Most Popular Show and 2010 and 2011 Whatsonstage.com Award for Best West End Show.
Perhaps it was just having the chance to go out with some girlfriends in the big smoke, leaving Good Witch Glinda at home looking after the kids, but I left the show feeling as though I was defying gravity and more than happy to have the label of Wicked Witch in our house. After all, she's not really wicked, she just needs better PR.
About the show
Wicked shows at the Apollo Theatre, Victoria, London - www.wickedthemusical.co.uk
I imagine girls aged 8 plus would love this show - lots of pretty fairy dresses and make-overs. Boys will enjoy the baddies and everyone will enjoy how the characters fly around the stage.
Warning: younger or more sensitive children might find some of it a bit scary - like the flying monkeys.
Note: I was given free tickets to see the show.
So mums, let me know if you ever feel like the Wicked Witch of the West and how you feel about being the misunderstood meanie.
Posted by Home Office Mum at 11:24 No comments:

Temper vs proximity of children graph 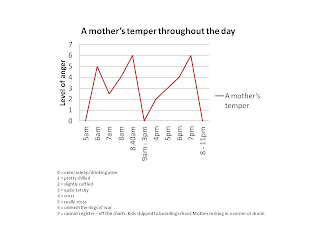 This look like anyone else's day or just mine?

(Click on the image to make it bigger)
Posted by Home Office Mum at 09:51 4 comments:

Newer Posts Older Posts Home
Subscribe to: Posts (Atom)
HOM used to stand for Home Office Mum. It made sense - I used to run my own business from home and was a mum. Now things have changed. I've sold my business and have a new quest: to figure out what to do next. For thought clarity, I go into a serene yoga pose and chant: HOM, HOM, HOM. That is until my inner peace is disturbed by the yells of two boys trying to decapitate each other. The road to enlightenment is longer with children.

Home Office Mum
If you are a fellow blogger who fancies a chat or a PR person who feels I might be just the person to review your expensive holidays abroad, you can contact me on melissatalago at gmail dot com.

Copyright of all posts belongs to HomeOfficeMum.